The analysis of vibration or wave propagation in discrete materials forms a large part of metamaterials research. Metamaterials can be thought of as materials that possess a microstructure. The latter brings additional attributes to the material that allow for fascinating and counter-intuitive physical effects. Examples include materials that expand when stretched and media that can influence the propagation of waves leading to phenomena such as negative refraction and cloaking. One way that a microstructure can be incorporated into a material is to use a discrete material represented by periodically placed masses linked by some material connections, forming a lattice. Examples of structured media of this type are shown in Fig 1.

Fig 1: Several examples of structured materials. Each lattice is composed of elastic links connecting masses at the junctions of the structure. Some lattices with simple microstructures  formed from periodic repetitions of (a) squares and (b) triangles are shown. In (c) a more complicated microstructure is shown, where the structure is composed of two different types of links and masses (indicated by different colours).

Lattices can be easily designed and tuned to give different wave propagation phenomena. Much literature exists in this direction, in particular for systems containing masses connected by elastic links, but it is seldom that the question it is asked: “Do these materials undergo realistic deformations when a vibration propagates through them?”.

Here we analyse the behaviour of failure processes in discrete materials and the role  vibrations play in such phenomena. Primarily, we focus on failure propagation in flexural systems, i.e. where the masses are linked by beams. These structures have a wider applicability than their mass-spring counterparts and represent simplified models of civil engineering systems such as buildings and bridges (see Fig 2). The propagation of failure in these engineering systems is the focus of project CAT-FFLAP.

Fig 2.: Periodic systems containing flexural elements and masses. (a) A mass-beam chain (horizontal black line) supported by transverse beams (orange lines). (b) A mass-beam chain supported by a bed of elastic columns or springs. These simplified models have potential applications in the modelling of civil engineering systems. Some examples include long rooftops of industrial sheds or warehouses in (c) (image from https://www.prefabsteelstructure.com), which may be represented by the structure in (a). The structure shown in (b) may approximate the behaviour of a long bridge such as the Seven Mile bridge in Florida, US, shown in (d) (image from http://www.figgbridge.com).

Example of dynamic failure propagation in a flexural microstructured medium

The modelling of failure propagation in structured systems, such as in Figs 1(a)-(c) and Figs 2(a)-(b), also sheds light on the microstructural processes involved in the failure process, as discussed in [1, 2]. When failure propagates in a material, many processes occur at different scales that contribute to the failure phenomenon. A discrete periodic medium offers a pathway into tracing and understanding these processes at the microlevel. As an example, consider the removal of a beam from an elastic foundation as shown in Fig 3(a). The removal process may be caused by some remote load applied to the beam. On the microlevel, the structure considered may be interpreted by the flexural system in Fig 3(b), showing a mass-beam chain partially resting on spring supports.

Fig 3: (a) A beam undergoing separation from an elastic foundation. (b) A discrete system of periodically placed masses connected by beams and that are partially supported by an springs. The system in (b) represents the microstructure of the system in (a). The separation of the beam from the foundation in (a) is interpreted via the removal of springs supporting the masses inside the discrete medium in (b).

The removal of the beam from the foundation can be represented as the removal of spring links supporting the structure in Fig 3(b).  How this process occurs and how this is influenced by the action of the remote force is a very interesting question.

In fact, the load may produce an excitation within the structure causing the springs to extend and compress. If one assumes that a single spring can break when some limit is reached, then the spring is removed from the system. When this happens, more vibrations can be released into the structure. This wave radiation process is a feature exclusive to the model of the microstructured medium. There exists several ways in which collections of the springs can fail in the manner described and the appearance of these possible regimes can be predicted from the model analysed in [3,4] (see Fig 4). 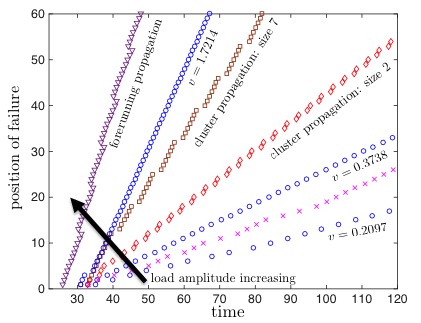 Fig 4: Here we show how the interface in Fig 3(b) propagates within a sufficiently large structure is subjected to a remote oscillating load. The results are based on the numerical investigation of the associated transient problem. We present the dependency of the failure process on the amplitude of the oscillating load, which has a given frequency. The failure process occurs in 3 regimes: (i) a steady state regime (blue markers), and two non-steady regimes referred to as (ii) cluster (magenta, red and brown markers) and (iii) forerunning propagation (purple markers). Only three steady state regimes are observed at speeds predicted by the mathematical model, eg. v=0.2097, 0.3738 and 1.7214. The load amplitudes required to activate the non-steady regimes may also be predicted. In the transition from one steady regime to the next, the interface undergoes cluster propagation, where the interface propagates in periodic bursts or clusters of different sizes. For a sufficiently large loading amplitude, the front propagates in the forerunning mode, where  the failure process can alternate between the interface and a location ahead of the interface. Details of the analytical and numerical computations can be found in [3, 4]. 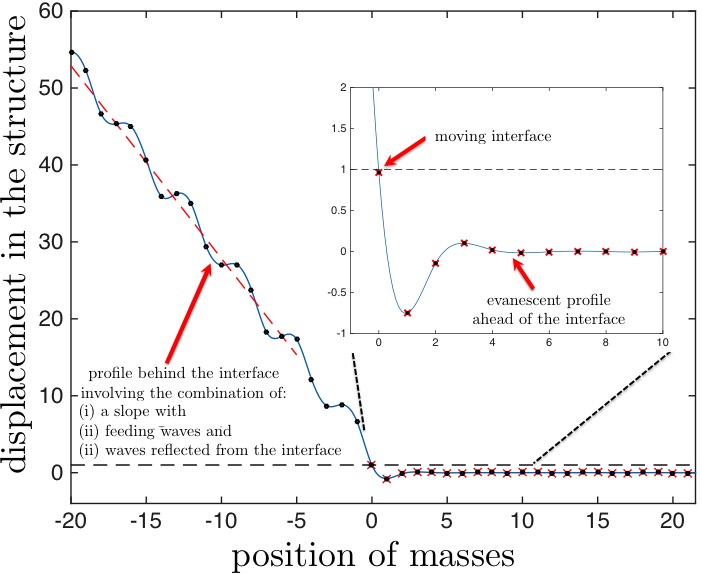 Fig 5: A representative profile of the structure during the steady state failure process in Fig 3(b) determined from the theoretical model. The masses supported by springs are represented by crosses. Behind the interface the structure possesses a slope along which feeding waves and waves reflected from the interface propagate along. Ahead of the interface there is an evanescent profile, where no vibrations propagate ahead of the interface. We note there exist steady regimes where waves can be transmitted ahead of the moving interface. An example of how the profile above can be realised when the structure is subjected to an oscillating load is shown in the Video below. In these computations, we have assumed the springs supporting the masses break when extending by a normalised displacement equal to unity, this line is represented by the dashed black line.

Video: On the left of the video, we show the global view of the discrete structure in Fig 3(b). The unsupported part of the structure is represented by the blue line, and the part of the structure supported by springs is represented by the red line. The oscillating point force, whose position is indicated in the video, generates feeding waves which propagate towards the interface that is highlighted by a green box. A close up of the system inside this box is presented on the right, where the masses supported by springs are shown as red dots. The feeding waves produced by the point force excite the masses in the structure. When the supported masses reach a critical displacement (indicated by the dashed horizontal line) the spring supporting them is assumed to break and the corresponding red dot is removed on the right. We note that after approximately 1:22 the steady state failure process is achieved and resembles that shown in Fig 5. In this scenario, the profile of the structure  involves a slope along which feeding and reflected waves propagate along and an evanescent profile ahead of the interface.

It is envisaged that by understanding such processes that new designs for stronger or more robust materials can be created for various applications in engineering and physics.